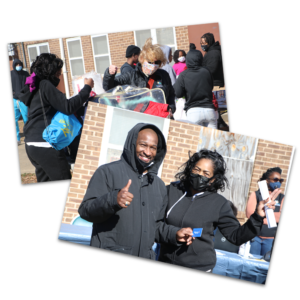 Dillehay Courts is preparing for a revamp! While once a sought-after location for many families in the early 1970s, INLIVIAN’s last public housing development, has declined with age and in many cases become obsolete.

Our initial concept for the site was to rehabilitate the units. After due diligence we determined that residents would be better served by redeveloping the property in its entirety. The units and supporting infrastructure are at a point that they are no longer suitable and the only solution that made sense for our residents was to redevelop. When INLIVIAN shifted strategies, we also gave those families who wanted to move, an opportunity to relocate.

The redevelopment project will be built in phases. The new design will increase the number of families served and more effectively utilize the nearly 18 acres of land in Charlotte’s Innovation Corridor, one of the fastest gentrifying zip codes in the country. INLIVIAN’s continued presence will be an emblem of inclusion for families who would otherwise not be able to live in and enjoy this burgeoning locale in the Queen City.

Get answers to frequently asked questions.

Dillehay Courts (the “Community”) is the last INLIVIAN Public Housing project to convert its rental subsidy program to RAD.  The initial concept was to rehabilitate the units as we transitioned them into the RAD program, but in 2018 we saw this as somewhat of a lost opportunity and shifted the strategy to demolish the existing structures and redevelop the Dillehay Courts using low- income housing tax credits (the “Project”).  The site would be redeveloped by Horizon Development Properties, Inc. (“HDP”) which is wholly-owned by INLIVIAN.

The Project was originally built in the early-1970s and is outmoded and, after a review of the available construction documents, this approach would not result in an effectively modernized development.  The bedroom sizes are small and there is no air conditioning, washer/dryer or dishwasher.  During our review, it was determined these amenities cannot be added to the current structures.  The site is large at 17.97 acres and is underutilized in its current improved condition of 136 total units.  It is perfectly positioned for redevelopment into a mixed-income community and can be up-zoned to a UR-3 district which would allow for a significantly higher density.

The Charlotte Center City 2020 Plan identifies an “Innovation Corridor” that the city desires to target for significant economic development initiatives and investment; Dillehay Courts is in this Corridor.  When the jobs come, there will be a need for (particularly) work force housing level rentals.  If we redevelop Dillehay, up-zoning it in a manner that provides the highest density and flexibility, we can accommodate our returning households, plus some critical mass of workforce level (up to 80% AMI) units, to sustain the low-income units (through income-averaging).  This site is also in a designated Opportunity Zone, which makes this change in vision even more exciting.

The Mayor has indicated her desire to maximize the density on all HDP redevelopment sites.  In order to preserve the 136-units of extremely low-income housing, we must add critical mass of a number that will operate the Project in a manner that is sustainable and viable.  We believe that for Phase I, that number is 122; however, we are studying the potential to increase this unit count.  The households in residence will be given the opportunity to return to the new Project.  Relocation will conform to URA.

INLIVIAN has the ability to increase the density significantly in this Community, redeveloping the site to create a true mixed-income community (the “Project”) versus the 100% at 30% AMI Community that exists today.  There is also a desire for an anchor grocery to alleviate the food desert that exists today and, with the Opportunity Zone, we may be able to model New Market Tax Credits with Housing Tax Credits for the larger phase.  With a 17.97-acre site, and an average unit size of 1,000 square feet, the number of units could be as many as 785, depending on set-backs and open space requirements; or that residential density could be offset by retail including a grocer.  HDP would likely not increase the number of residential units to the maximum due to requirements of the construction type that are applicable when you exceed 5-stories, and the public process, but the planning possibilities are endless and exciting.

INLIVIAN will dispose of this site to its development subsidiary, Horizon Development Properties, Inc. under RAD Section 18 and RAD Blending.  It is our understanding that PIH 2018-04 (HA) permits certain properties converting under RAD to receive Section 18 approval and vouchers, subject to the availability of appropriations, for a portion of units as long as it is part of a strategy to replace and redevelop the units.  Specifically, 3.A.3.c of the notice states:

“Comprehensive Rehabilitation or Replacement through Rental Assistance Demonstration (RAD).  The PHA is converting at least 75 percent of the public housing units within a project (as project is defined by RAD) under RAD and meets the requirements of the RAD Final Implementation Notice REV-3, H-2017-3, and is replacing the units proposed for disposition (up to 25 percent of the public housing units within a project) with Section 8 project-based voucher (PBV) assistance in accordance with 24 Part CFR part 983.  The aggregate number of replacement units (RAD and PBVs) must meet the RAD “substantial conversion of assistance” requirements.  To qualify, the project-based Section 8 units (RAD and PBV) must be newly constructed or substantially rehabilitated (defined for purposes of this clause as hard construction costs, including general requirements, overhead and profit, and payment and performance bonds, in excess of 60% of the Housing Construction Costs as published by HUD for a given market area) without using 9% Low Income Housing Tax Credits.”

The site will be developed in two separate and distinct phases with the smaller parcel (see attached) which includes 36 units only, being developed first.  The remaining 100 units would remain occupied and operational to accommodate the families residing there currently.

Phase I consists of 36 units on a 4.34-acre parcel.  The current concept is to build 122 residential units in one 3/4 -story building with surface parking (see attached).  The existing families on this parcel can be relocated to vacant units in Phase II or in other HDP-owned properties and would be relocated consistent with an approved Disposition Application.

The design and construction team is in place and will begin within the next week to kick off the rezoning process.  This Project does not score well enough on the site amenities to receive 9% tax credits.  A Preliminary Application for bond volume and 4% LIHTC will be submitted after May 1 and before October 1.  Once the Preliminary Application is submitted, a schedule of milestones will be provided by NCHFA.  It is our desire to close by year end; however, the process may more realistically extend into the first quarter of 2020.  The biggest impediment now is the HUD RAD conversion for the rental subsidies and the soft financing.  INLIVIAN had received HUD approval for the conversion and a CHAP; however, a shift in concept from renovation to redevelopment requires the submission of an alternate application.